400 or so activists from Hammermsmith and Brent assembled at Acton Park on Saturday to march to Ealing Common where they were joined by thousands from the main march which had begun in Southall.

The marchers were campaigning for the retention of the Accident and Emergency facilities at Ealing, Hammersmith, Charing Cross and Central Middlesex hospitals. 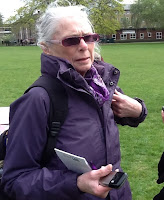 Sarah Cox, speaking for Brent Fightback, declared that the campaigners should retain unity in the face of attempts to divide and rule and campaign for ALL the hospitals and resist any closures until they were convinced that any alternative arrangements were in place, secure and more effective than what they replace,
Posted by Martin Francis at 09:02