Lobby against this budget which hits children and the vulnerable 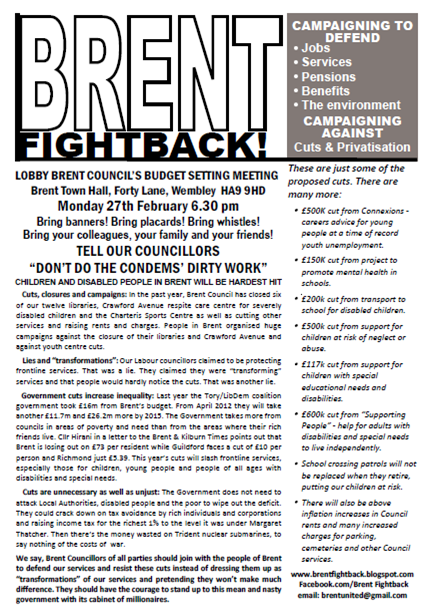 Brent Council's budget setting meeting to decide expenditure and cuts for 2012 - 2013 is at 7.00 pm on Monday February 27th. Brent Fightback is calling a lobby outside the Town Hall from 6.30 pm.The above leaflet can be used to alert people to some of the drastic and damaging cuts that are being proposed. It can be used to encourage people to join the lobby
Please download the leaflet and e-mail to anyone you think may be interested in joining us.
As well as the cuts detailed in the leaflet, there will  be deep cuts to the budgets of every single Council department and increases in charges. For example, there will be cuts in the Council's services to schools (organising admissions, support for children with special needs,training etc) but schools will be charged more for using these services. The £500 cut for services to children at risk includes a review of children's centres coverage which will see a reduction to the range of children offered support.
The demolition of Willesden Green Library Centre and its replacement in 2014 with a Cultural Centre will be discussed by the Council's Executive on Monday 13th February. Many people are concerned that the original 1894 Library building (which now houses the Brent Irish Advisory Service) will be demolished and that the Cultural Centre will definitely not include space for the Willesden Bookshop. these decisions appear to have been made on the basis of a "consultation" that consisted of two meetings, one attended by seven people, the other by five! Brent Council obviously cherishes its reputation for full, democratic consultation. supporters of the Old Library and the magnificent Willesden Bookshop will be at the lobby. There are online petitions for both the Old Library and the bookshop. Please sign them if you haven't already and pass on the details to others:
For the Old Library:  HERE
For the Willesden Bookshop:  HERE
There are people suggesting that Ann John should stripped of her OBE for disservices to literacy. The leader who brought us the Transformation of our libraries by triumphantly closing half of them - because apparently we can now buy books at ASDA  - now appears happy to see the demise of a bookshop that provides an invaluable service to schools, stocks a variety of books you won't ever find in ASDA and nurtures the talent of local authors.
Who runs Brent Council? There was a strong feeling at the last Fightback meeting that our Councillors are far to ready to follow the lead of the officers without question. This was equally true of the previous LibDem/Tory administration. We elect our councillors to represent us and to act in the best interests of the people of Brent, to provide and defend services that meet their needs. Council officers should be there to advise, to provide the information on which decisions are made, but democratically elected councillors, not unelected officers should run the council and they should be accountable to the people through genuine consultations.
Brent Fightback blog and Facebook page: Brent Fightback now has a blog www.brentfightback.blogspot.com  to give more details of matters raised in these emails and keep up to date with cuts and the campaigns against them. We also have a Facebook page www.facebook.com/brent fightback and as always you can contact us by email at brentunited@gmail.com.
Posted by Martin Francis at 06:39