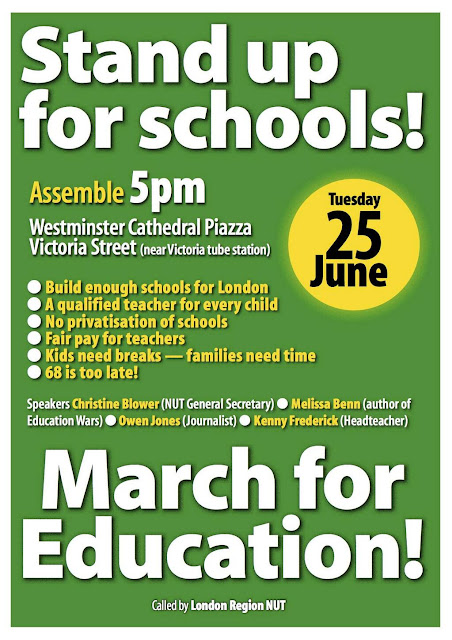 COPLAND FORCED ACADEMISATION - Unions are pushing for a meeting with parents. You can support by writing to Michael Pavey (new lead member for children and families) Cllr.Michael.Pavey@brent.gov.uk urging that parents are consulted before any imposition of an Interim Executive Board (IEBs replace the more democratically elected governing body). Also correct claims made by Pavey and Mohammed Butt that the strikes disrupted students taking national examinations. In fact children were well supported and able to take their exams as normal with staff invigilating exempted from the strike, some striking teachers went in to help settle the students in before th exams started, and the demonstration outside the school was ended before the exams started so there was no noise to disturb the students.

GLADSTONE PARK FORCED ACADEMISATION - Parents Action Group are asking Pavey to instruct officers to make clear statement on behalf of the Council that with LA support and the current management trajectory the school is capable fo becoming Ofsted 'Good' without a forced academy.

MICHAELA FREE SCHOOL - Residents complained about erection of giant pupil recruitment banner on Arena House without planning permission and it was removed on Wednesday. Considering leafleting prospective parents in Autumn 2013 when admissions process begins for the first year's intake in  September 2014.

SAVE THE QUEENSBURY
Fairview Homes have withdrawn planning application and will reapply but only delay not victory. Still intend to demolish the pub.  Seehttp://savethequeensbury.info/

BRENT CIVIC CENTREGradual move of staff into the new building. Possible demonstration to greet any official opening ceremony. GD to investigate and circulate broad range of groups with information.